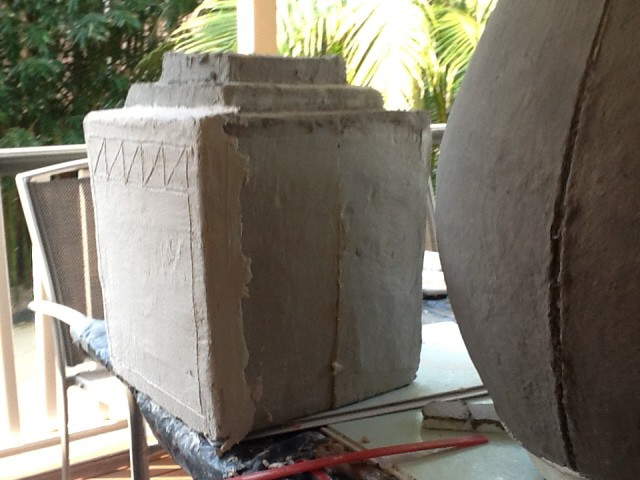 Today’s post is by Warren Eggleton, a reader from Australia. Warren has been experimenting with the idea of altering the basic paper mache clay recipe by adding Portland cement. He’s making huge pots with the mixture, along with some of the original paper mache clay, and it looks really promising. You can see how he makes the pots below.

Jonni, I have had some success with the cement paper clay mix which is:

This mixture is quite similar in consistency to your clay mix, not quite as good but ok.

I mixed an 8 roll batch of this mix, the temp was 32c =89f, it took me 1.5 hours to get this applied to the pot armature and I just finished as it was starting to stiffen.

I did one since then where the temp was down to 23c=73f and I had some left over and it was still workable after 2 hours. As we are coming into summer the next big pot that I do will be done with 2- 4 batch mixes. So depending on where you live the work time for the mix will need to be obtained first.

This mix does not harden as quickly as the paper clay because the cement needs time to cure, when it does, which may take a week it is very hard and dense.

I tried some acrylic instead of the PVA and found it not to be a workable as the PVA mix.

Once this mix has set completely I don’t think water is going to have much effect on it, though I would not immerse it in water.

As far as waterproofing is concerned I did some samples using Potassium Silicate diluted 1 part to 4 parts of water. This needs to be spray applied (I used one of those kitchen spray bottles) apply a good wet coat, leave for 24 hours and then another wet coat, apply a third coat the next day, you should find that this coat takes a long tome to soak in, if after ½ hour it is still wet wash off the surplus with water, if you don’t the surface will remain slippery. For the next 3 days wet the object down with water, this causes the growth of calcium silicate crystals in the cement mix, which closes up voids in the mix creating waterproof barrier.

I purchased 20L delivered from Melbourne to Sydney some 500 miles total cost $165Aus. Rather cheap considering this will make 100L when diluted.

If the cement mix is to be the final finish and it is to be painted I would recommend using white cement.