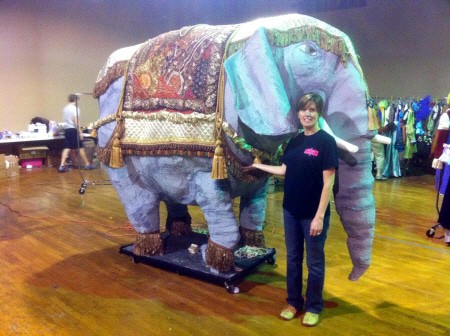 Back in May Dianna Duffy left this comment on our blog:

Our high school was fortunate to receive the first license in the state of Mississippi this year (and across an 8 state area) to perform the Phantom of the Opera after being released to the public. After performing 5 nights locally to more than 3500 attendees, Amory High School was asked to perform a one night only performance at the famous Orpheum theatre in Memphis, TN.

This was Amorys second opportunity in the last several years to perform at the Orpheum, however still the only high school to be invited there. When asked to perform at the Orpheum, our art teacher began looking for elephant patterns with a vision to create an elephant for the Hannibal scene to bump the scene up even more than it was shown originally at the school. I would love to send you pictures of our Phantom elephant based on your pattern from start to finish. I think you would be proud and we are ever so grateful to you for publishing your pattern! By the way, our elephant was over 7? tall and 10? long. The scene was incredible!!

My answer, of course, was YES – we want to see those photos.

Yesterday I received a whole set of photos of this fabulous creation, a full-sized elephant with all the fancy trimmings, along with these additional comments:

Included are some post-Phantom of the Opera production pictures after our high school performed an incredible performance on the magnificent stage of the famous Orpheum theater in Memphis, TN, some pics in the museum after production, and a few of the elephant (named BAE) while being built with our director, Steve Stockton, climbing up to “test it’s sturdiness.”  : )  One of these days I will obtain and send a really good picture of the Elephant while it was in use on the stage at the Orpheum. The elephant was built just for the performance at the Orpheum (after the locally sold out performances) and is now housed in the local museum in Amory, Mississippi permanently. Our high school art teacher, Nan Moon, found your site and used your pattern (with a few modifications) to create BAE.

Below are Dianna’s photos. If you’d like to see the elephant pattern she refers to, you can find it here. You can see they made some major changes, such as turning a baby elephant pattern into a full-sized adult, changing the the armature to keep it sturdy but reducing the weight, and adding some very impressive trappings. Congratulations to all the folks at Amory High School in Amory, Mississippi who made this event (and the wonderful paper mache elephant) possible.

Are we impressed, or what? Thanks, Dianna, for sharing these photos with us.