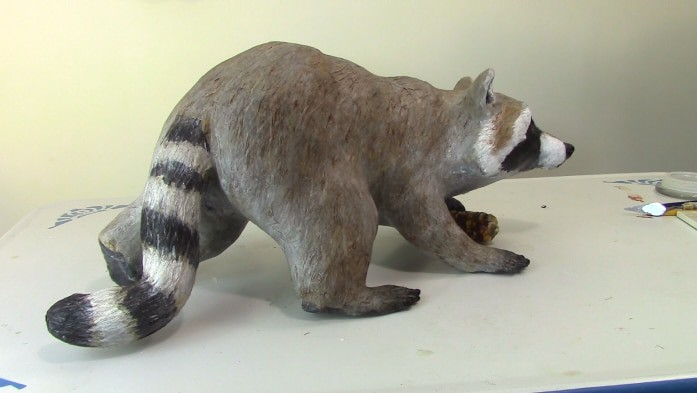 Many of the tutorials on this site cover many posts and videos. I thought it would be helpful to put links to all these longer tutorials here on this new page, to make it easier to find each lesson in it’s proper order.

Some of my readers have used these extended tutorials like online classes, working along with me as I put out each new post or video. Others watch the techniques that are shown, and then adapt them to sculptures of their own design.

If you’re looking for shorter one-page tutorials, you can find them under the Blog-Art Library link at the top of every post. And if you’re looking for faster projects, with patterns that make most of the shapes for you, visit my sculpture and mask pattern page.

This half-mask was made with the fast-setting paper mache paste and heavy blue shop towel technique that I developed for my book How to Make Masks! It’s a fast and easy way to make masks for theater, Mardi Gras or Halloween.

This was my very first really big paper mache project, and all the steps ended up in one video. Even though this isn’t really a series of posts, I think it fits here anyway because so many people have followed all the steps in the video and used the pattern that I provided on this blog. This video has been seen by over 1.5 million people – and there are now many baby paper mache elephants in the world. I love seeing photos of them. Some of my viewers even use my techniques to make full-sized adult Indian elephants, (they’re huge!) for theater props and weddings.

This little Chihuahua was made over a simple armature made with wire, foil and masking tape. Then strips of newspaper were added, using paste made with flour and water. I used the same techniques in this project that I used for all the sculptures in my book Make Tiny Paper Mache Dogs.

How to Make a Cat with Paper Mache Clay

A lot of people have followed this lesson series and made cats of their own. Some of my readers’ cat sculptures are shown in progress in the comment sections on each lesson page, and some of the finished cats were added to a special post I made, just for them. The techniques used in this tutorial are the same as those shown in my book Make Animal Sculptures with Paper Mache Clay.

This raccoon was an experiment to see if we could use the blue shop towels with a paste made with corn starch. It worked, but I much prefer the joint compound and glue paste with this kind of paper. That said, this is now one of my favorite sculptures, and the free pattern has been downloaded by many of my readers for their own raccoon sculptures.

This was the second time I used the air-dry clay over plaster cloth, and the first time I made the sculpture hollow inside. The success of this project helped me develop some of the techniques used in book How to Make Adorable Baby Animal Dolls, which is now in print. Since this was an experiment, it isn’t really a “lesson” per se, but the project did span several posts, and it has inspired quite a few people to try this technique for their own sculptures.

This series of posts show how to make a pattern for a sculpture, how to make the armature with crumpled paper and masking tape, and how to use the paper mache clay to add details like feathers.

This project used plaster cloth and air-dry clay over a paper armature made with a cardboard pattern inside. Then I finished the sculpture to make it look like cast iron. The posts don’t go into a lot of detail because this was also a bit experimental, but I did include the sketch I used for the pattern.

This was a rather long project, using a different way of building the armature than I normally use. The finished piece was “bronzed,” and has a natural green patina. The sculpture was inspired by a comment from one of my readers, and by the famous mixed media sculpture by Degas.

This two-part project was fast and easy. And the result looked really nice on the front door of my house last Christmas.

This wolf mask combines the techniques shown in my book How to Make Masks! plus some added paper mache clay for the texture on the ruff.  I tried creating this wolf-shaped display mask over a human-shaped mask form, which may or may not have been a good idea… 😉 The mask came out really nice, I think, even with all the experimental changes. For a much easier wolf mask, see my wolf mask pattern here.

Not a paper mache sculpture, obviously, but this one was fun, and a lot of people have said the videos inspired them to try a concrete sculpture of their own.

I created this tortoise while working on my coloring book, Endangered Animals Color and Learn Book. I intended to use it as my first experiment in weatherproofing a paper mache clay sculpture. However, the weatherproofing experiment failed miserably. The spar varnish I used cracked in the hot Eastern Oregon sun. Still – the sculpture itself was fun to make – I just don’t recommend putting yours outside, like I did. 🙁

I used drywall (plaster board) for the pattern on this project, just to see if it would work. It didn’t! Use cardboard, instead. I also used Super Sculpey as the form for the head and I forgot to remove it after the paper mache was dry, like I should have. The oil in the modeling clay seeped through the paint and ruined part of his face. It took about a year for the spot to show, but then it just kept getting bigger. Live and learn. 😉