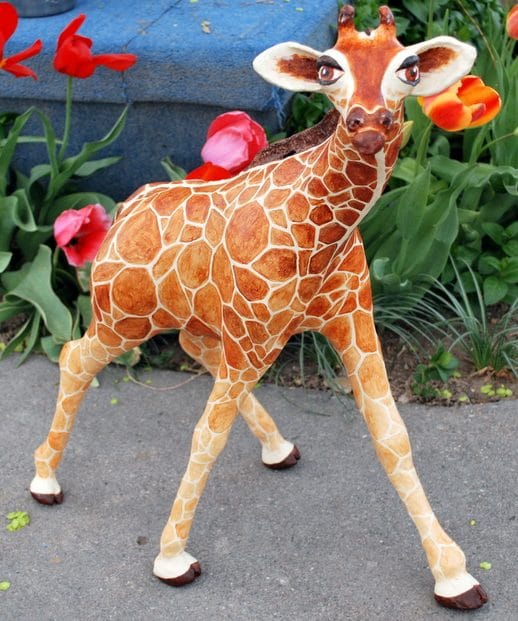 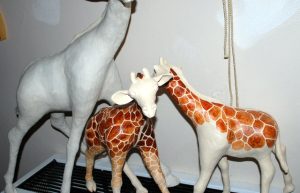 Today’s guest post is by our old friend Rex Winn.

Lately, he’s been making giraffes with paper mache clay. These long-legged creatures can be a real challenge to sculpt, and he has some excellent tips for us.

Be sure to scroll all the way down – you don’t want to miss all his how-to photos. Thanks, Rex!

And by the way, if you’d like a faster project, where all the shapes of that beautiful giraffe head are already created for you, be sure to see my own pattern for a giraffe sculpture here.

How I Make My Paper Mache Giraffes

There have been many giraffe sculptures on this site, and all of them have inspired me to give it a try. Here are the lessons I have learned while making three giraffes. Any comments or suggestions are most welcome.

Illustration 1 shows the first step after cutting out the giraffe pattern. I used the grid system. The smaller giraffes were 37 mm grids and the larger giraffe was 47 mm grids (a difference in height of almost 26 mm or 10″). I used foamcore on the smaller giraffes, and on the larger one (seen here) I used double-thick cardboard. I used Aluminum Wire, 11.5 AWG, on the legs (armature wire).

It is not clear on the photo, but I began wiring on the hoof with an “L” shape on the bottom of the hoof, and curved the wire up the leg and around the thigh area. Because the legs are thin, I wanted to make it as strong as possible. The wire goes on the OUTSIDE part of the leg.

I used aluminum foil on the legs up to the belly. I kept it as compact and as narrow as I could, trying to take into consideration the depth of the paper mache clay. I didn’t want the legs to get too thick, but I wanted strength.

Illustration 2 shows a layout of all the giraffe pieces. When drawing the pattern from a reference photo, I marked where the eyes, lips, and legs attach to the body. (See Jonni’s book of Making Animal Sculptures for great details on this process.)

WORKING WITH THE LEGS:

The first thing I did on the small giraffes was cover the legs with paper mache clay up to the belly, including the hoofs. The problem I did not foresee then was that when the rear legs are glued onto a graduated piece of Styrofoam (the rear hips), the hoofs are not “straight” on the body. You can see on Illustration 9 that the left-rear hoofs kick out (perhaps making it more playful, but …).

On the third giraffe, I decided not to add clay to the legs first. That was an even bigger disaster because the legs would not hold the weight of the body at all, not even the cardboard. The legs constantly buckled and bended.

Illustration 3. In the end I had to hang the poor giraffe from a picture hook and add clay to one leg at a time.

HINT: With the small giraffe, the legs were much easier. I tied the feet together where I wanted them. (The legs were covered with dried clay, so they were stiff, but the clay was not on the body.) Using skewers did the trick for me. I broke a skewer to length between the ankles, and held the skewer to the ankles with masking tape. I used 3 skewers to keep the legs in place. I added clay on the body where the legs (now dry) meet the body. When that clay is dry, it binds the body and legs; the feet will not move.

CONCLUSION: Illustration 2 is a photo from the fourth pattern that I started. The legs, covered with pm clay and dried, were strong enough to easily hold up the body, even on the larger model.

I placed the cardboard leg on the Styrofoam, marked the outline of the leg to where it joins the belly. I then cut the Styrofoam, double-checking that I have the right depth, and mark which leg it goes on. I glue it on the leg with a hot glue gun.

Illustration 2 also shows the ears. I prefer the aluminum wire on animals where I want to bend the ears. As Jonni warns, watch the poky bits of wire. They are sharp and will stab you. Covering them with masking tapes helps alleviate a few of the injuries. I drew the ear pattern on the cardboard to use the grid as a measuring device. I placed the wire on the pattern, marked the wire with a magic marker, and cut them out.

I do not cover the hoofs with pm clay until the legs are attached to the body and the complete armature is dry. In the “hanging giraffe,” I could not put clay on the head because I needed the rope to hold it off the ground. When the clay is dry, I stand the giraffe and add clay on the hoofs. This way I can make certain all feet touch evenly on the ground.

Illustration 4. Before glueing the legs onto the body, it is easier to complete the armature for the head. The cheek is one grid-square deep on each side. (I think my first giraffe is a better shape in the face because I paid closer attention to the width at the top of the head.) I use aluminum foil for the skull and face.

Illustration 5. Next I added the snout, leaving room at the bottom for the chin and lower lip.

Illustration 6. After the snout, I added the back of the skull, and then the lower jaw and chin. When making the lower jaw, I usually find that I did not built enough upper jaw or that it was not square enough (like the upper teeth). This usually means adding addition foil to the upper mouth, the area forming the upper lip and cheek. The aluminum foil showing in this illustration is the lower jaw area. Adding it last in this manner helps me keep it separated from the “camel-like” upper lip, nose, and gives the giraffe a mouth.

When adding the nose, I had to be careful not to lose the vertical line of the nostrils. A good pattern here will help you raise the nostrils and keep the upper lip the right depth. (Talking is easy!)

Illustration 7:  I leave the cardboard pattern of the horn in the middle of the head until I get to this point. Then I cut the horn off the armature, put aluminum foil on both sides, and then tape it to the top of the skull. When I cut off the horn, I can see where it needs to go on the top of the head and the placement will be correct. (As Carl Sandburg wrote, “It all helps!”)

The little piece of blue is where I cut it off the main cardboard pattern. This is a top view of one side of the skull. I then do the same process to the other side of the face.

If you want to turn the head, you can easily bend the neck when adding paper to that area. The skull area, of course, will not bend.

Illustration 8: The large giraffe is now ready to get hoofs. Loki (the black dog) is supervising and Maddie (visiting) gets her first lesson. The giraffe is covered with pm clay. I added the hoofs and let it dry.

Illustration 9: In these projects, I wanted a smooth finish, so for my second layer of clay I used Jonni’s smooth air-dry clay. It is at this point that I add details to the ears, nose, hoofs, and add eyes. When the clay is dry, I gave it a sanding, and coated it all with Jonni’s gesso to seal and get the projects ready for painting.

I covered everything with Unbleached Titanium White acrylic paint. I tried other “off-white” colors, but this one was my favorite. The colors I used for the pattern were Burnt Sienna and Burnt Umber, using acrylic glazing liquid as needed (all the time!). Occasionally I would add Ultramarine Blue to create a darker color (black) on the hoofs, tail, and nostrils.

Illustration 10: Here is the finished giraffe, 25″ tall. I will cover her with a matt acrylic varnish. My favorite spray varnish is FolkArt clearcote acrylic sealter, matte finish. It is made to cover paper mache. It does not yellow like every other type of spray varnish I have used. Any suggestions on a matte varnish would be welcomed!
I have seen different patterns on painted giraffes. I have a mask in which the only shape used is a triangle. Remember when painting your spots or shapes the story of “The Three Bears”: Papa Bear, Mama Bear, and Baby Bear – three different sizes. In other words, a variety of sizes and a repetition of design.
Hope this helps someone. Show us your projects, please.

15 thoughts on “Explorations into Creating a Paper Mache Giraffe”