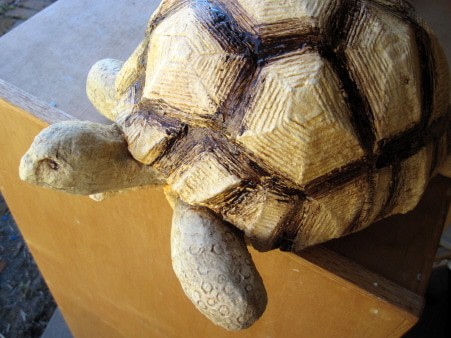 Today I started a small sculpture of an endangered Ploughshare Tortoise, (Geochelone yniphora) — also known as the Angonoka, Madagascar Angulated Tortoise, or Madagascar Tortoise. I’ve been doing a lot of reading about endangered animals lately, and I found the story of this tortoise in Jane Goodall’s book Hope for Animals and Their World: How Endangered Species Are Being Rescued from the Brink

. There are only a few hundred left in the wild. They were put in jeopardy first by habitat destruction, but now they’re threatened by the illegal pet trade. Four of these extremely rare animals were recently stolen from their hidden reserve to sell to rich people who like to collect the last of things.

I think it’s much nicer, for many reasons, to collect images of rare species, or (even more fun) make our own paper mache sculptures of them. I did that recently with our friend the chimpanzee, another threatened species.

Then I added the head, legs and tail. I’m not worried about details at this stage because I’ll add those when I apply the second layer of paper mache clay. (This project would work with traditional paper mache strips and paste, too, although the interesting textures of the skin and shell would be more difficult to do.)

Now we have a naked tortoise, so we have to add the shell. (Today I learned the difference between a turtle and a tortoise – turtles live in water, tortoises live on land. As you figured out already from reading two of his common names, this guy lives in Madagascar, a large island off the east coast of Africa, and home to many rare animals.)

I had some old padded envelopes sitting around, and I used three of them to make the upper shell. Much cutting and taping and testing was needed to make it fit. At this point it’s just sitting on top of the body, but I’ll tape it on next.

Now I taped the top shell onto the body, and cut a piece of cardboard for the bottom shell. I could not find a photo of a Ploughshare tortoise upside down, so I made a guess about the shape of the lower shell. However, we do know that the bottom shell has an odd horn-shaped (and uncomfortable-looking) protuberance that sticks up under the beast’s neck. That’s where the common name “Ploughshare Tortoise” comes from. I cut that into the piece of the cardboard, bent and curved it, and padded it with a little bit of crumpled paper and tape.

This is how he now looks from the bottom, with both top and bottom shells taped on:

You saw how he looks right-side-up at the top of this post. The next step is to add the first layer of paper mache clay, which I’ll start doing as soon as this post is uploaded. I’ll be creating the textures on the skin and shell when the second layer is added.

Drying will take some time (it’s still raining, so I still can’t try out my new solar dryer, which is still sitting in the garage. I can’t believe how much rain we’ve been getting this month.) Since the solar gizmo is out of commission, I’ll bring a fan into the house and set the tortoise in front of it. That should help it dry faster, even in this humid weather. I’ll put up another post as soon as I have more to report…