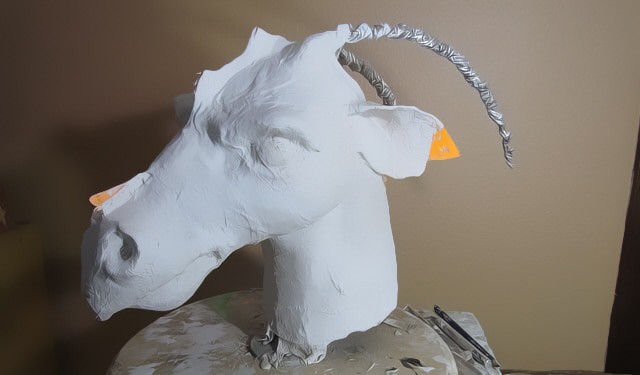 I made a few changes to the dragon’s head, as you’ll see in this video. I didn’t like the straight horns, so I made him some new ones. I extended the spiky things down over the top of his head, and I may now add a rhino-type horn to his nose. (Haven’t decided yet.)

The video shows the plaster cloth on the head (although I couldn’t leave the camera on during that entire process – too messy) and then I cut the head open, removed the clay, and put the head back together. Tricky! Next, I build an armature for the body. I’m rethinking the wings – maybe he’ll get some, after all.

I mentioned in the video that the armature I’ll be making probably won’t stand up to a gang of kids, and I know several people are thinking about making a dragon for their school or library. If anyone knows of a sure-fire way to make a safe armature that will prevent a sculpture from falling over or breaking if small children climb on it, be sure to let us know. I don’t have the training to engineer something like that, but it would be a lot of fun to make something like this for our local library.

Although, once the dragon was finished, I felt that the sculpture would be safe as long as it didn’t get knocked over. It was strong enough to hold the weight of a child – or even a small adult – and the spikes along his back would keep anyone from trying to sit on him anyway.

See all of the posts for this paper mache clay dragon:

34 thoughts on “Making the Dragon’s Head, Part 2 – the Plaster Cloth”