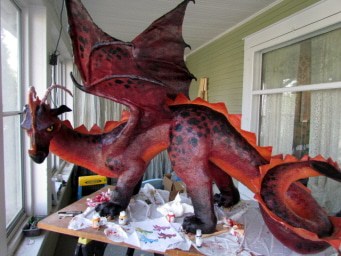 This is just a really fast note to let you know that I donated my dragon to the local Habitat for Humanity ReStore, and he was auctioned off November 14th 2014, at the American Legion on Western Avenue in Brookings, South Dakota.

For several weeks the dragon was on display on a high shelf in the ReStore, above the used chairs. (They named him “George.”) His eyes are rather piercing, so I hope George didn’t cause any heart palpitations as unsuspecting customers suddenly noticed him. He’s not an evil dragon, certainly, but he’s a no-nonsense kind of guy, and you wouldn’t want to cross him, I’m sure.

I wasn’t brave enough to ask how much the buyer paid for George. (George? Seriously??) I was afraid they would say someone bought him for twenty bucks – of course, the ReStore could put that twenty to good use, but it would hurt my ego. This fellow took a very long time to build.

By the way, it wasn’t at all hard to maneuver George out of my house through standard-sized doors. I worried about it, but mostly because my daughter held him by the head, and I held him by the tail, so we could go through the door single-file. That meant that the heavy body, where the wooden armature added a lot of weight, was supported only by the paper mache clay skin. But he made it through, and into the truck, and into the store, and out again, with no damage. Whew!

This guy was huge – way too big to fit into my house. But this article shows you how I made my very first dragon, and he fits on a coffee table. If I made that one again, I’d use a pattern inside, like I did when I made this Egyptian Hippo with paper mache clay.


Share on PinterestShare on FacebookShare on PocketShare on Email

See all of the posts for this dragon: 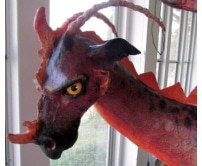 7 thoughts on “Dragon Sold for Good Cause”