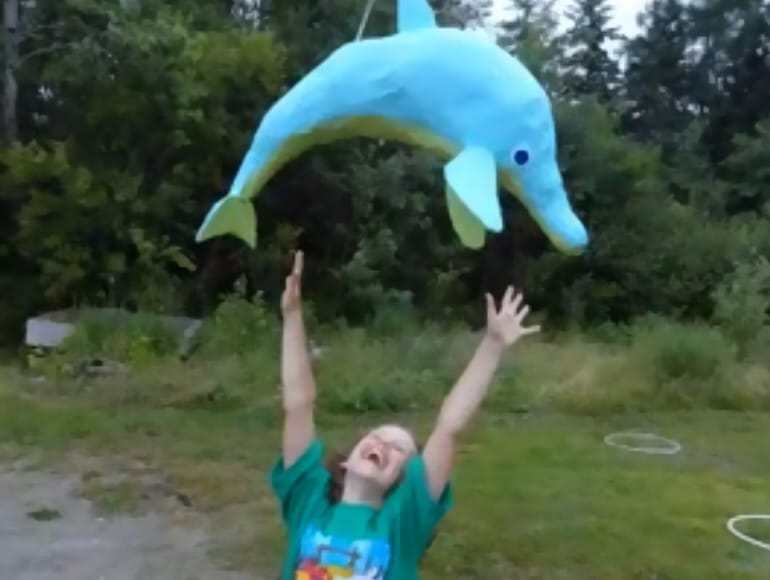 Silas Donham offered to spice things up a bit by allowing me to show you his video of a dolphin pinata he recently made for 10-year old Maggie.

According to Silas: “My method (for video editing as well as papier mache) is pretty much what Dan the Monster Man (gourmetpapermache.comÂ  ) does — the paste is simply white flour and water, mixed to about the consistency of heavy cream. I use big pieces of paper instead of tiny strips, and rather than dip them in the paste, I use my hands to spread a little paste, then stick a dry piece of paper to it, and spread a little more paste for the next layer. Thanks to Dan and to Jonni.”

Silas recently made another video, which you can find on his YouTube channel here. He read about my recent experiments with the paper mache clay recipe, and then did some experiments of his own. He came up with a few ideas that are definitely intriguing.

When you watch that video, make a note of the wonderful paper mache sun in the background. I asked him about the armature he used for the sun, and he offered to write up a few words so we could all see how he made it:

The background disk is four sheets of corrugated cardboard glued together in opposite directions with wood glue.  Then I sketched out a face and built it up with newspaper, masking tape, and tinfoil, the tinfoil being for the finer features.

I found both the newspaper and the tinfoil quite difficult to work with, scrunching too much in some places and not enough in others, and pretty resistant to corrections. (Admittedly I have exactly no sculpting experience, but I was wishing for some kind of clay that would stay where I put it.)  Consequently I did lots of removing and redoing, both before and after the first coating of clay.  For the rays I just cut triangles of cardboard and used masking tape to attach them.

I think altogether it took about three batches of clay to cover it all, front and back.  Unfortunately I took no pictures of it in progress, and I still haven’t gotten around to painting it, so no finished pic either.  Originally I was going to use it as a prop but the play has come and gone and now I guess it’s just for fun. Just-for-fun things end up pretty low on the priority list.

Thanks, Silas, for the pinata video, the experiments with paper mache clay, and for telling us how you made that beautiful sun sculpture!