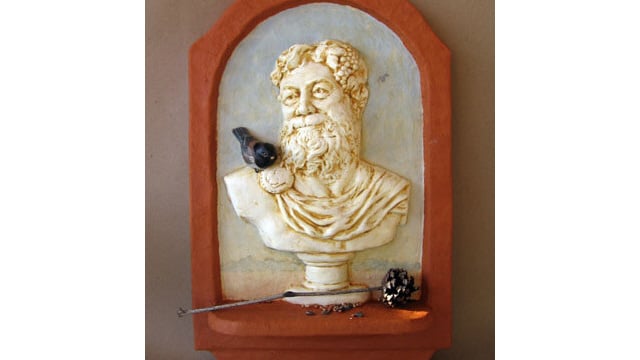 A faux marble bust of the Greek God Dionysus is surrounded by a paper mache frame. The frame was designed to look like an open niche in a garden wall.

I started this wall sculpture of Dionysus, the Greek god of wine (among other things) several months ago. It sat on my shelf, almost finished, for weeks. Have you ever started a project that you just couldn’t make yourself finish? And then discovered that you couldn’t make yourself start a new project until the old one was done?

Well, yesterday I finally got to the point where I couldn’t stand to look at it any more, and I put the final touches on the sculpture. Now I can move on to something new, at last.

This paper mache wall sculpture actually started as a challenge to myself. I wanted to try to create a  narrative work, using a passing moment in my life – like a snapshot – and using symbolism instead of literal images. When I conceived of the challenge I was just finishing The Lightning Thief, by Rick Riordan. (Yes, I know it’s a kid’s book, but why should they have all the fun?) One of the main characters in the book is Dionysus.

That same day a sharp-shinned hawk perched on my grape arbor, hoping to snag another junco from the bird feeder. Or maybe I should say he was hoping the surviving juncos would be dumb enough to forget the hawk grabbed one of them the day before.

So, the wall sculpture features Dionysus, standing in for the grape arbor. I moved the hawk into the background to keep the painting from being too uncomfortably carnivorous, and moved the junco up onto the bust of Dionysus just because I think he’s cute. The dark songbird is balanced by a miniature thyrsus.

One thing that slowed this project was my curiosity. After spending hours sculpting a bust of the god out of plasticine clay I had to learn more about him. I discovered that many women worshiped him quite passionately, but the more I learned about his character, the less I understood why. Fortunately, I did not use the artistic form that was used by his cult to call the god – a giant mask – so he shouldn’t be tempted to come visiting any time soon.

This 3D painting of Dionysus is part paper mache (the frame and the little junco sitting on the god’s shoulder), and the bust of Dionysus was cast in Duncan DC100 Doll Composition. I would have preferred using the Activa Li-Qua-Che Pourable Papier Mache that I used for the Christmas ornaments, but I didn’t have enough left. (The Duncan product is hard and plastic-like, and isn’t much fun to paint).

The little junco was made just like the 7 hour bluebirds, (different colors, of course), and the frame was made out of cardboard shapes covered with paper mache strips and paste, like the Dogon mask. Because the frame is flat, there was a very strong tendency to warp. To counteract this tendency I dried it slowly between each coat, and put a weight on top to keep it flat.

I don’t know what my next project will be. If you have any burning questions about how to sculpt with paper mache, or if there is a specific paper mache tutorial that you would like to see, please let me know in the comments below.