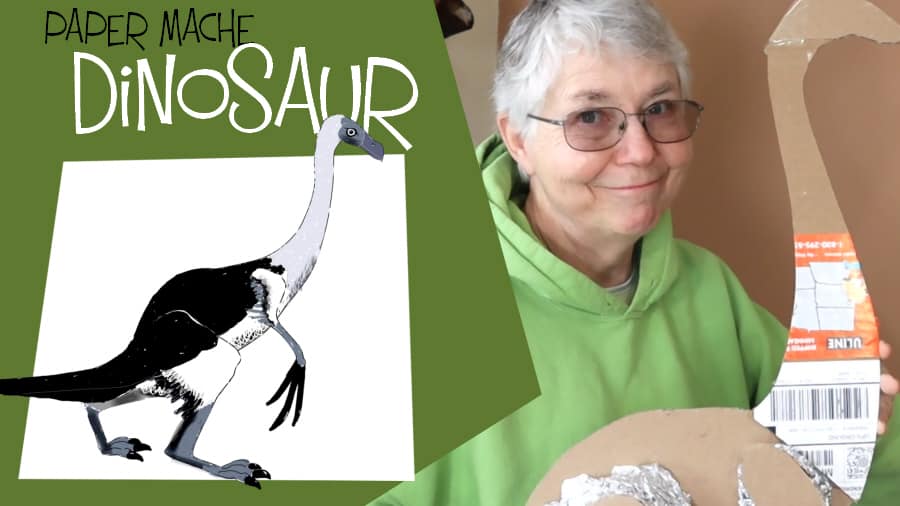 Valerie asked me to make a paper mache dinosaur in a comment on YouTube, and I thought it was a fantastic idea. And even though I never finished making the dino, I still think it’s a great idea. 🙂

I’ve been reading about the Therizinosaurus lately in the book Dinosaurs – The Grand Tour, and I’m fascinated by how paleoartists imagine an entire 30-foot-long animal when all they have are a few ribs and three claws.

I’ve never made a dinosaur sculpture, but I’ve wanted to for a long time. This one isn’t actually finished yet, but it was fun creating the pattern.

But I admit my method for creating the pattern was strange, to say the least.

In fact, I almost didn’t show you this part of my project, because it might look just a tad unprofessional.

But you know what? The creative process can get messy, and we all know it. So why shouldn’t I just turn on the camera and let you see how I turned the kangaroo from my last video into a pattern for a Therizinosaurus?

A bit of chopping, a bit of stretching, and now he’s ready for muscles, toes and claws. And a beak, of course. 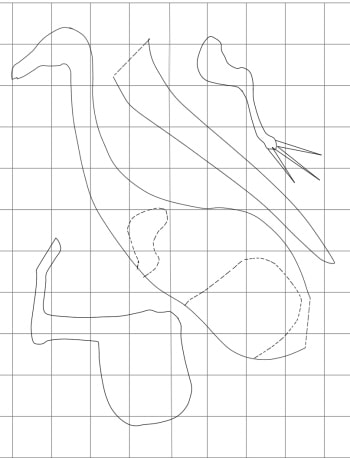 If you’d like to use my pattern (no need to start with a kangaroo) click here for a printable PDF.

Or watch this video if you’d like to make your own pattern for a paper mache dinosaur, and for instructions on how to use the grid method to make your pattern as large as you want.

In the next video I’ll start working on those feet, and I might add the claws, too. This creature has swords on the end of his fingers that are half as long as his arms – but he is supposed to be a herbivore, not the deadly dinosaur that he was first imagined to be.

Or a Dragon, Perhaps?

I’ve always thought dragons were invented to help people understand the existence of dinosaur bones. How else could they explain such huge creatures? And perhaps modern scientists weren’t the first people to discover that dinos had feathers.

The Therizinosaurus would work well as a dragon, with a few horns on his head, like the ones on Dracorex hogwartsia. He already has a dragon’s serpent-like neck, and those impossibly long claws that are half as long as his arms. All he’s missing are the wings. Maybe wings with three-foot claws? Shudder…

To learn more about this famous dinosaur, (the real one, not my made-up dragon idea) visit this page: http://dino.wikia.com/wiki/Therizinosaurus

25 thoughts on “Make a Pattern for a Paper Mache Therizinosaurus …”