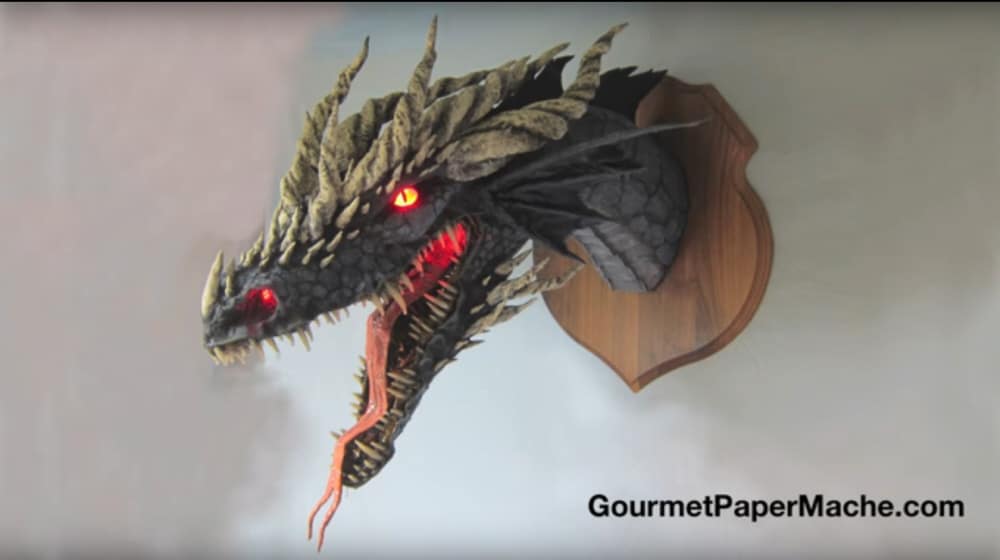 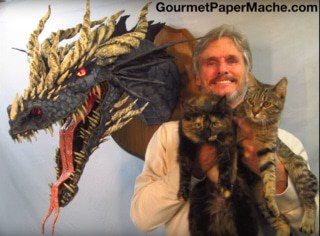 A few weeks ago, someone forwarded a link to one of Dan Reeder’s dragon videos. She reminded me that some people haven’t yet discovered Dan’s paper mache dragons and monsters. His work is so unique and amazing that I can’t bear the idea of anyone not seeing it.

His videos are an international sensation, but I found one I hadn’t seen yet – it’s his latest video showing how he made his Dark Paper Mache Dragon. I grabbed it off his YouTube channel for this review.

I hope he doesn’t mind that I also snagged a still from the video that shows off the artist and his two very helpful cats. (If he does mind, he may send one of his dragons to teach me a lesson. That big fellow leering over his shoulder doesn’t look very friendly. Did you notice the fire in his eyes?)

Dan’s fast-motion videos are entertaining, but they move way too fast to use as actual how-to instructions for making your own dragon. Fortunately, Dan has written down all the instructions you could ever need in his two books – Papier-Mache Monsters and Paper Mache Dragons.


I think I’ve read just about every book that’s been written about paper mache, and I can say that Dan’s books are among the best. He has a natural teaching style, a wonderful sense of humor, and his instructions are organized in a way that makes it easy to follow the steps and end up with a completed project by the time you finish the book.

Dan’s dragons and monsters look complicated when they’re finished, but the steps for making them aren’t complicated at all. Just take your time to actually read all the instructions, and you’ll end up with a fabulous, and original, paper mache masterpiece.

I’m happy to say that Dan’s books and mine regularly compete for the top spots in the paper mache how-to book genre on amazon.com. Not that we’re competing, of course. No, of course not. That would be silly.  😉

The armatures: Dan’s method for making an armature results in a strong, lightweight form for the inside of his sculptures. Much of the inside of his large dragons and other creatures is empty space. This is especially helpful if you want to hang your sculpture on the wall, like he did with the Dark Dragon in this video, or if you’d like to hang one of these fierce beasts from the ceiling.

Or even if you just want to occasionally move your dragon so you can vacuum the floor.

The way they’re made also makes it easy to create the fluid, dynamic postures that a dragon requires.

The head of this dragon is a “segment” of the armature that has been cut open to create the open mouth. This is the easiest method I’ve ever seen for creating an open-mouthed creature.

The “cloth mache”: The final skin on his monsters and dragons is probably what Dan is most famous for. He uses torn bed sheets instead of paper for the final covering. In the video you’ll see him making the folds beneath his dragon’s chin and neck with the cloth, too. The cloth mache is really strong. He has a blog post that shows one of his dragons that’s been perching in a tree in Seattle for several years without any water damage – I looked for it so I could link to it in this post, but I can’t find it. If you know where it is, please let us know.

I have to admit that I don’t know what Dan is using for those flat scales on his dragon in the video. It looks like traditional paper pulp, but I could be wrong. does anyone know? If not, I’ll go to his Facebook page and see if he can remember where it is.

I do know (since I read his books) that he uses house paint to color his dragons and monsters. His books show how he gets the interesting painted finish. It isn’t as hard as it looks.

If you want to know exactly how his dragons are made, check out his books on amazon.com. When  your dragon is finished, you can show him off on Dan’s site at https://gourmetpapermache.com/your-paper-mache/ – but we want to see it, too, so be sure come back to this blog when it’s done and show us how it turned out.

Have you already made something using Dan’s instructions? Tell us all about  it in the comments below. Better yet, show us with an image added to your comment.