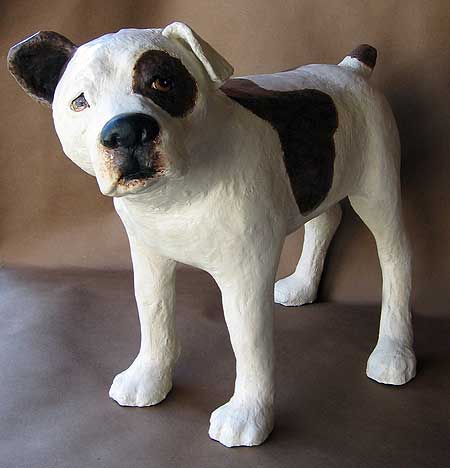 The inspiration for this sculpture came from one of my first websites, which contains many original articles about choosing a dog from your local animal shelter. While I was doing the research for those articles I visited many Humane Society websites as well as taking a lot of trips to the shelter in Portland, Oregon. I found that one of the most common breeds in big-city pounds looked very much like this one.

Like most of those pound puppies, my “bulldog” is really a mutt. I think of this as the quintessential American mongrel – loyal, sturdy and courageous, he would have been a valued family companion in any frontier town. In big cities, where backyards are small, every dog he meets on the street is a stranger, and families work away from home for many hours a day, this is the type of dog that many people think of first when they hear someone use the term “too much dog.”

So what kind of dog is he, really? The broken brindle coat seems to imply “American bulldog.” A quick search through the photos on the American Bulldog Rescue website suggests that this term is a euphemism for “pit bull.” Another creative way animal shelters use to not say pit bullÂ  is “boxer/lab cross.” In this case, however, our pup might really be part boxer. At least his first owner must have thought so – why else would his tail be docked?

This sculpture is fairly large. He’s 17 1/2″ tall, 23″ long and 10″ wide. I used a press-board armature, as I did for the paper mache jackrabbits. I didn’t take photos of the bulldog in process, but he was made using the techniques you’ll find in the panda tutorial. He was finished with a glue/marble dust gesso, natural pigments, and acrylic paint, with a matte finish.

As I came close to finishing this bulldog sculpture I realized that he reminds me a lot of a dog we had when I was a kid. Henry J. was a great dog. He could chase balls for hours and he was very polite when I shared my ice cream with him (I don’t think my mother knew we both used the same spoon.) But he did have a few faults. One of them was being a bit too quick to fight when he encountered strange dogs, an embarrassing trait when we camped at State parks.

Here’s a sketch I did of Henry J. when I was about 10 years old, a very long time ago. He grew to be about 35 to 40 pounds, but the local animal shelter sold him to my grandfather as a Boston terrier cross. While he was still a tiny puppy we believed it. In truth, he was just a shelter dog, a mutt, and a wonderful family companion.

Last week I started out with 5 sculptures in process. I finished the polar bear a few days ago, and I should have the old gray mare done in the next day or so.

26 thoughts on “Bulldog Sculpture is Finished”