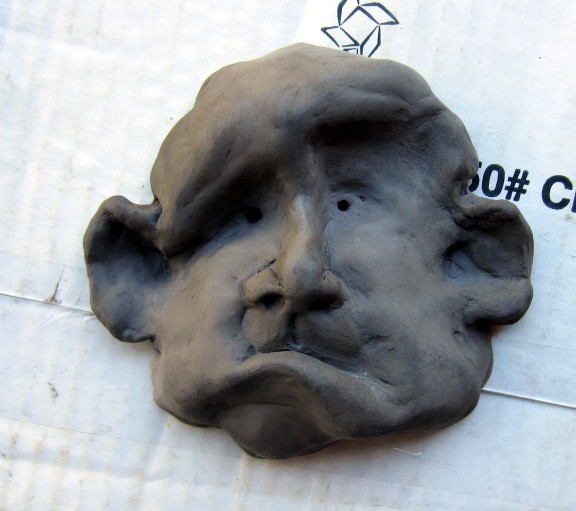 I did do one experiment this month while I taking a break from putting books in boxes. I wanted to find out if you can really fire clay in a barbecue grill. And yes, it looks like you really can.

I started out turning some of my Wonder White low-fire clay from Georgies into paper clay. (This is completely different from paper mache clay, of course. Totally different thing. No paper mache was harmed during the course of this experiment…) I’m not suggesting that this particular clay body is the right one for this experiment – it just happened to be what I had on hand. To make the paper clay, I followed these instructions.

Why add paper, you ask? Because it’s supposed to reduce cracking during the drying and firing process, and I needed all the help I could get.

I rolled out a bit of the paper clay and smooshed and pushed and pinched it into a silly face. (I kind of like him). Then I set it aside to dry all the way through.

Then came the fun part. I followed the instructions for firing clay in a barbecue grill that I found here. I didn’t follow the instructions to the letter, though – after all, I was just playing around, and I had to make do with the materials and equipment at hand. I made my guy thicker than the author recommended, just because I don’t have much experience with working with real clay. And I used a smaller barbecue, since it’s what I happen to have. Both of these changes probably altered the outcome of the experiment.

The result? The clay did change during the firing process. If you let it sit in water, it won’t turn back into mud like unfired clay would do. However, it didn’t get hot enough to harden it as much as I would like. A fingernail can scratch the surface. The smoke from the charcoal darkened the white clay, but I don’t mind that. I think fired pieces could be painted, but the barbecue doesn’t get hot enough for a glaze, I think.

After I move into my next house, I hope to play with this some more. I have another 40 pounds of clay, after all, so I should do something with it. I’ll scrounge up a larger barbecue, because I think it needs to be large enough to hold more charcoal. And I’ll use a fan to get more oxygen to the burning charcoal to make it even hotter, as the author suggested. I think those two changes would bring the temperature up enough to fire the clay more completely. And maybe I’ll try making some hand-built pots for my houseplants. I’ll keep you posted.

7 thoughts on “Barbecued Clay – It Actually Works (Sort Of)”