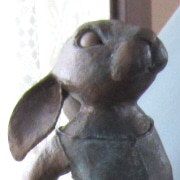 This is the first video in a series. This little ballerina bunny is based on a mixed media sculpture by Degas, but only very loosely. I thought about using a Bugs Bunny-type body, but then I just sort of started adding paper to the wire armature, and this is how she ended up. Still no head, of course – that’s in the next video.

The bunny was suggested by Francine when I asked readers for ideas for my next video. (This probably isn’t exactly how she expected it to turn out,  but I hope she likes it.)

If you’ve used the paper mache clay before, you might notice that it seems a little stiffer than usual. I did add about 1/4 cup of wet low-fire pottery clay, but I think that’s not what changed the consistency. I didn’t have any all-purpose flour in the house, so I used the bread flour that I had on hand. It has stronger gluten, and I think that made the PM clay a little stiffer than usual. I like it, so no regrets.

To see the rest of the Ballerina Bunny series: