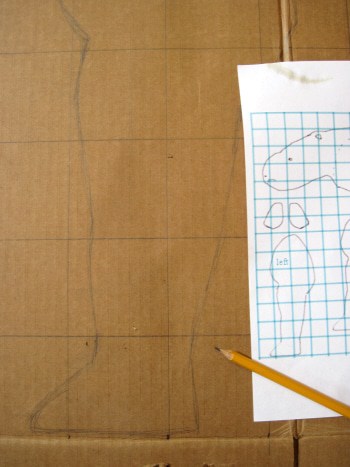 This is my first progress report on the baby rhino I’m building. If you want to follow along, you can use my pattern, or draw your own. It’s always a bit scary to show you a project before it’s finished, because I’m never quite sure how it will turn out. In fact, right now the critter looks pretty silly – but I have confidence that it will look like a rhino as soon as the armature has been filled out.

I started by transferring the small pattern I drew a few days ago onto a large piece of cardboard. I used three-inch squares, which will make a sculpture about 25 inches high and 40 inches long – a bit larger than my golden retriever. This is a very big baby!

I intended to use a rather elaborate system of wire to hold all the pieces together and support the frame, but my dad (Pete Havekost, the concrete bench guy) suggested rebar instead. I happened to have just enough rebar left over from making the arches for my runner beans, and it turned out to be much easier than my own idea (thanks, Pete).

Short lengths of 3/8″ rebar can be purchased at Lowes or Home Depot, but mine was about 10 feet long so I used my hack saw. I cut two pieces 42 inches long, and bent the bars into a U. The bars were then passed through a hole in the shoulder and hip. A short length was then used to secure the rebar in the right position to hold the leg patterns.

Once the legs were taped to the rebar I realized that some adjustment was needed. It isn’t difficult to untie the wire, pop the bars through new holes, and tie it back together again. The tool shown above is specially made for this purpose, but I don’t know what it’s called.

To get a piece of cardboard large enough for this project, I unfolded the box that my greenhouse plastic came in. That left folds in several places on the body, which made the armature too floppy. I used some heavy wire (called Merchant’s wire, for some reason) to stiffen the edges of the body piece. It will also help me position the neck as I add the crumpled paper. The armature now looks like this:

Obviously, it isn’t even close to done. Next step is adding crumpled paper to build out the shapes and define the skin folds and details. The ears will be made out of an aluminum grid. As you can see, my kitchen table is just big enough to hold this critter – if I do make a momma rhino, it will take up my entire deck.