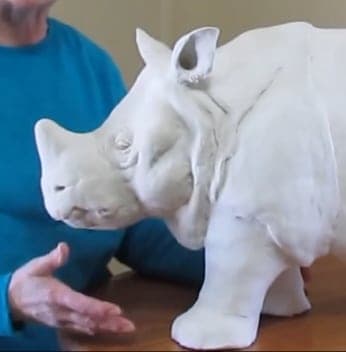 I’ve been working about an hour a day for almost a week now to get the Indian rhino covered with the air-dry clay. Now all that’s left is to finish the other side of the head and give her some toes. Then I decide how I’ll finish her.

I know you’ll think I’m nuts, but the primary reason for making her (I decided it’s a girl) is because I want a large picture of a rhino to go over the couch in my new living room. I’ve been imagining that rhino in just that spot ever since I decided to buy the house, way back in December. But there’s still no rhino on my wall.

I tried to paint one on canvas, but I didn’t like the way it came out. Now I hope this lady will work instead. The sculpture won’t go on the wall, of course, but if I like her enough when she’s done I’ll photograph her (or hire someone to do it for me) and then print the photo poster-sized. I’d like to take her out to Oakwood Lakes State Park to get a nice background that I can fiddle with in Photoshop. Not that I actually know how to do that, of course…

Anyway, take a look at how the new air-dry clay works for rhino skin.