Made by Amy Cole

After tons of research, followed by countless hours of work, I am excited to share my completed giraffe! He stands about 7.5 feet tall from hoof to ossicone.  I started with Jonni’s giraffe pattern. Then I built an armature from (4) 1 x 1’s and a 2 x 4. I used a few shims to angle each leg outward a bit. I used a thick dowel rod for the neck. I nailed them all together with my nail gun. Once the armature was sturdy, I started filling in his body and neck with bubblewrap and packing paper, all held in tight with masking tape.

Once the “inner bulk” was done I got to work on the shape of his legs. Using a side view photo of a giraffe from the internet, I used the graph method that Jonni shares to enlarge and transfer the image of his front and rear legs onto large pieces of cardboard. I cut those out and hot glued them on to the padded armature. (Personal Tip: when copying the graph design onto large cardboard, it helps me to use dots instead of drawn lines,  then once the dots are in the right spots, I draw the lines.)

With his cardboard legs in place, I started adding more tightly crumpled paper, and aluminum foil to define the legs, knees, hooves, chest, and rump. I fashioned a tail from pipecleaners, masking tape, and duct tape. I ended up having to chop off his rear end because I had made it way too large.

Once I was happy with  his shape, and everything was covered tightly with masking tape, I started the paper mache clay process. I put 2 layers of that on him, letting him dry completely in between. (For reference, that took about 3 1/2 batches of clay.) I wanted him to be a lot more smooth than he ended up being with just the paper mache clay, so I covered him with a thin layer of drywall joint compound. Once dry, I sanded him smooth with a damp sponge. Next I covered him in a layer of gesso made from glue, drywall joint compound, and cream colored acrylic paint. He was still a bit more gray looking than I wanted, so I covered him in a layer of store bought gesso mixed with a more yellowish-cream acrylic paint.

I freehanded his spots in light pencil before painting them a reddish brown. I painted his hooves, inside ears, tip of ossicones, and eyes with black acrylic. I finished his eyes with a white speck to mimic a reflection, then top coated them with a glossy varnish from Liquitex. Finally, I covered everything but his eyeballs with a coat of matte varnish.

Lastly, I purchased inexpensive faux fur sheets from Hobby Lobby and cut strips of it for his mane. I added the same type of fur in black to his ossicones and tail, and then white fur inside his ears. The final touch was a flashy set of false lashes from the dollar tree.

What a labor of love he was! He was my first big project, and he took a considerable chunk of time to complete, but I had so much fun with it. His next destination is a safari themed baby shower next month. I can’t wait to get started on a lion next! 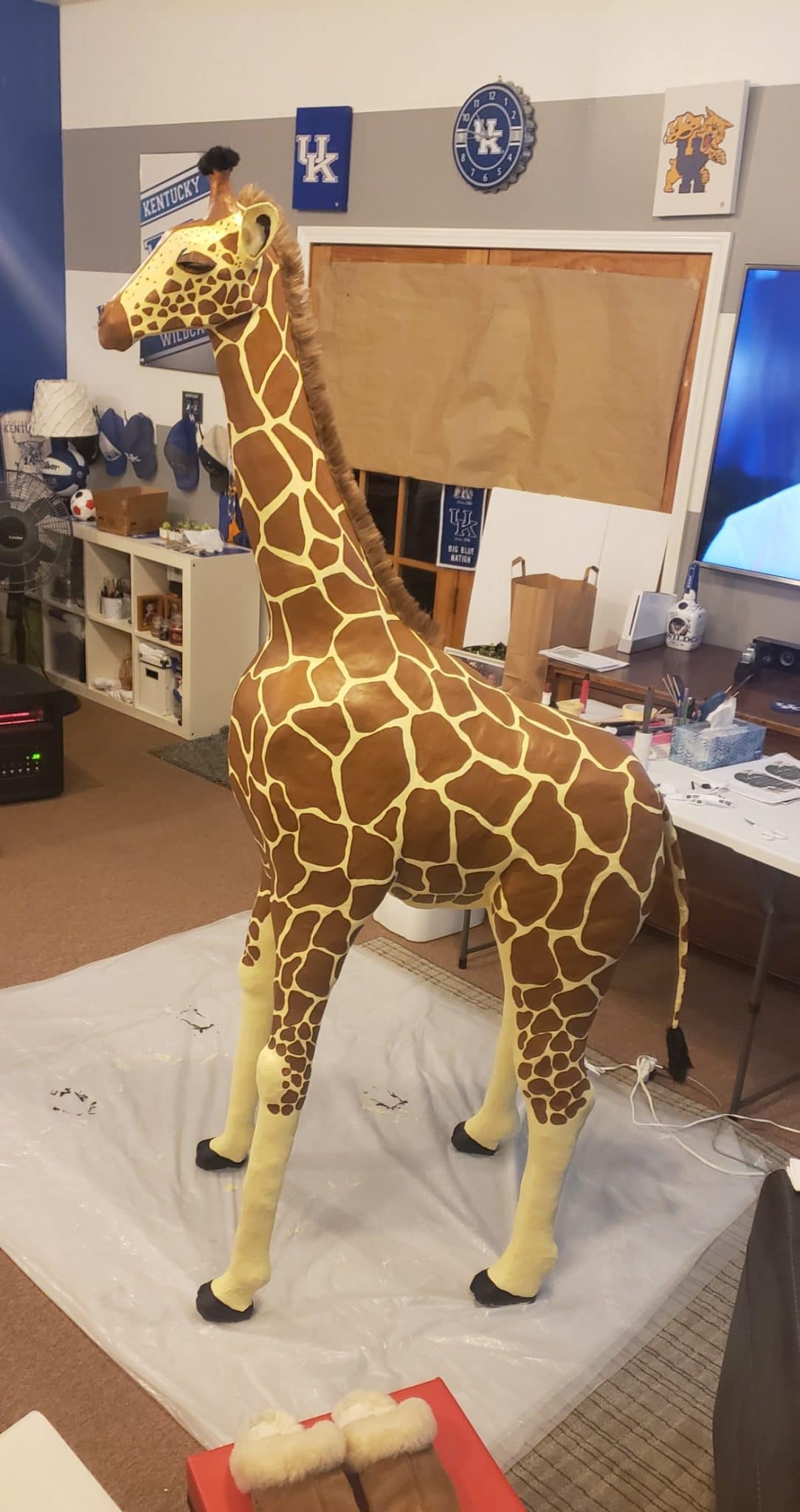 [Note from Jonni -I asked Amy if she had any additional photos so we could see how the armature was made. Fortunately, she had lots, so I’m adding them below. If you’d like to try making a giraffe yourself, or use her ideas to create an armature for another type of large animal, these photos are really going to help. Thanks, Amy!]